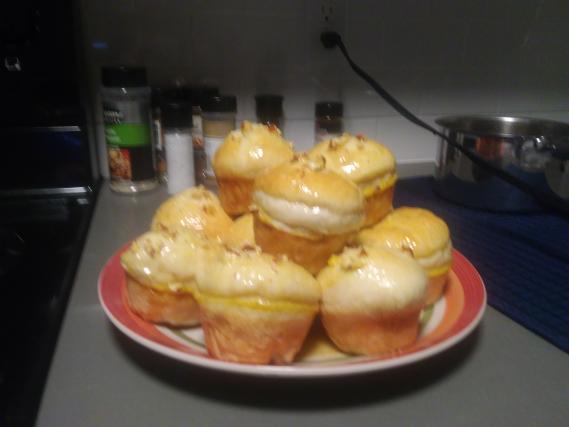 Mmmmmmm, what’s in those? Did you make them?

I did! I put chicken, carrots and broccoli on the inside. I used egg wash with chopped almonds before baking them. The glaze is a honey butter glaze. The only thing I didn’t make from scratch though was the biscuit dough. I do plan on making dough from scratch though at some point. They were amazing! <3

Oh my! That actually sounds absolutely DELICIOUS, is this your own recipe? It sounds delightful!

In a sense. Though basically I just altered the actual Glazed Mcguffin recipe;
Original: Chicken beak, Horse hooves, Elephant tusks, asbestos and eye of newt. Not that very appetizing is it? But! I found a way to make them properly edible! https://seraphinesimp.tumblr.com/post/642815228042756096 So looking at this post and found out what each ingredient can relate or sub for the show.

The glaze I made up with some marinade I made for the chicken, boil it with butter, honey and powdered sugar as well as mustard seed powder to balance the sweetness.

Where’d you find the original recipe?

Also, how’d the McGuffins turn out? They look amazing, but were they any good?

A friend told me I believe. They said they heard it in the show. And they were delicious! The filling was good but I think it needs some tweeking a bit. I am thinking of adding honey and butter cream cheese to the filling to give it more…well filling.

Here ya go! sorry about that. I meant to say like how the tumblr post gave me an idea on how to find the proper ingredients for the recipe cuz the actual show recipe is freaking gross and less likely edible.

Glazed McGuffins from Sam and Max

2 broken up big florets of broccoli

Cut chicken breasts into small pieces, mix the mustard seed, lemon juice, oregano and water into a bowl. Put the chicken in the marinade and let it sit in the fridge for 1 hour. After an hour, pour marinated chicken and marinade into a pot, bring it at a slight above medium heat. When the chicken is looking white, put in your carrots and broccoli and let it simmer for 10 minutes. While it is simmering, flatten your biscuit dough to the right size and place in a cupcake/muffin pan. After letting it simmer, drain the chicken and veggies (Save the marinade) and spoon in the mixture into your biscuit cups. Don’t overfill. Once filled, pinch the dough well enough for it to seal and carefully pull the biscuit ball out and flip it over in the pan (pinched part on bottom). To give em a golden brown color, use some egg wash, almonds (You can put them inside the filling if you prefer) and brush that on your guffins. Bake for 16 minutes until nice and golden brown.

(NOTE: Make glaze as the mcguffins are baking)

For the glaze, mix in marinade, the sugar, honey and butter into a sauce pan and boil to simmer. After that’s all mixed, let the glaze cool down for a bit (the freezer should do the trick–just don’t forget it!) before glazing. Dip the cooled down Mcguffin into the glaze (top part not the whole thing of course), plate, rinse and repeat and TA-DA!

Real life Glazed Mcguffins! Hope you enjoy them as much as Sam and Max do! I know I did

Dudeeee that’s so cool!! Nothing like a good glazed Mcguffin to warm the soul