David Boyll: he’s Hugh Bliss, and he’s knows you’re hiding a cow. Voice of the evil Prismatology founder and Philo Pennyworth (also known as Mr. Featherly) in the Telltale episodes, David has been in voice acting since 2003. Before that he spent most of his time behind the microphone on television and video production.

But why hear it from me when you can get it from the horse’s – or chicken’s – mouth? Read on to find out how David prepares for a recording session, what the worst bit about his job is and whether or not he’s hiding a cow. Probably not.

Hi David! Please could you tell us about yourself and how you got into voice acting?

Well, it all started back in my mother’s womb, where I… no wait, probably taking you back too far… let’s see… ah yes. When I was a kid, my dad was a working opera singer, so you could say it runs in the family. Go ahead, say it, “It runs in the family.” Good.

Sorry, where was I? Oh yes, the voice acting… My friends and I loved entertaining ourselves and each other with character voices, impressions, vocal sound effects, and improvised skits, radio plays, films, and TV shows, but I did not have the desire to pursue performing. I studied Broadcasting in college and embarked on a career in television and video production – behind the scenes.

Fast forward to 2003… I’m working on the production crew of a big corporate sales meeting in Las Vegas and our Executive Producer says, “we need a 1950’s TV announcer for the VOG (Voice of God). David, you can do that, right?” Of course, right. After the show, our MC, the talented actor and improvisor, Corey Rosen, complemented me on my performance and suggested I look into voice acting. One thing led to another and I found myself studying with the fabulous Samantha Paris and the rest of the gang at Voicetrax in Sausalito: classes, demos, agents, auditions, sessions, hard work, time, and BAM! Voice Actor!

What do you like doing when you’re not voice recording?

Improv is my passion. I’m very active in the San Francisco improvisational theatre community. I study and perform at Bay Area Theatresports (BATS) and with the improv group “Shakespeare’s Stepchild”. I have a family and we enjoy going to the theatre (musicals, mostly) and watching movies on our separate laptops at home whilst simultaneously socially networking. I am also an avid baseball fan… Go Giants! 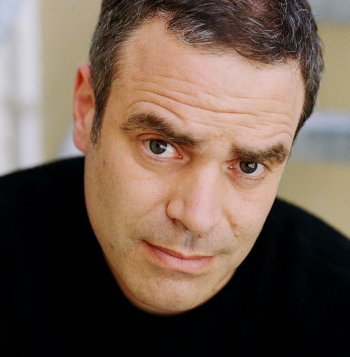 You’ve done a bit of work in sound recording. Do you prefer controlling the microphone, or speaking into it?

Having spent many happy years swinging a boom, mixing, monitoring, and recording sound while others speak, it’s high time I did some speaking. Is this thing on?

What’s the routine for a Sam & Max recording session?

I ring the bell, Jory buzzes me in, I grab the bathroom key, take care of business, I ring the bell again, open the door, hang up the key and put on the headphones. Then, after I let my characters speak for a while, I take off the headphones, grab the key again, take care of business, ring the bell, open the door, hang up the key, sign some papers, and leave. Pretty cool, right? Sometimes I have to pinch myself just to make sure I’m not dreaming.

Do you receive your script beforehand, or do you get given it for the first time at the recording session?

Brendan pretty much writes the dialogue while riding the schoolbus to the session anyway, so there’s no time. The script just kinda magically appears in front of me when I stand at the microphone. I have no idea how that happens. Like Hugh says, “It’s magic!”

Did you know of Sam & Max before you were involved with Telltale’s games? Do you ever play through the episodes?

Know of? Yes. Play through? Absolutely. After the recording is done, I usually have little recollection of what transpired, so I have to go back and see what wacky stuff came out of my characters’ mouths. Usually, it’s several months later so it’s like I’m hearing it for the first time… just like our audience!

Your main roles in the series are Hugh Bliss and Mr. Featherly. Which one do you prefer voicing and why?

Oh, I couldn’t possibly choose… these are two multilayered, pervertedly whacked out, psychically twisted entities that would most likely find insidious ways to execute excruciating revenge upon me for expressing a public preference. That being said, I think I identify more closely with Featherly/Philo because he embodies the essential duality of the human/chicken thespian existence. Plus, I get to fulfill my lifelong fantasy of being a classically trained Shakespearean actor, without all the formal training and memorization. Not to mention the tights and codpiece.

Do you have to go through any exercises to get your voice warmed up and into gear, or does it just come out naturally? Especially with such a ‘unique’ voice as Hugh Bliss’.

Yes, in fact, vocal warmups, tongue twisters, and diaphragmatic breathing exercises are quite possibly the most overlooked yet most important part of any actor’s preparation for performance. A consistent warmup routine breeds consistent performance (vital when having to match a performance recorded days or even months prior, at different times of the day, etc.) and will ensure that you and your “instrument” will have a long and productive career.

Hugh Bliss turned out to be the master villain in the first season. How aware were you of how his character would progress when you started?

It pretty much said it, right there on the character breakdown. I couldn’t wait to find out what happened after “Hi, I’m Hugh Bliss!”

Hugh is the founder of Prismatology. What religion do you think you’d start up?

Improvicism – a completely made-up religion dedicated to the sacredness of spontaneity.

Have you ever met the other voice actors or some of the guys from Telltale?

We wildline everything. I’m pretty sure that’s to keep us actors separated from each other… who knows what mayhem would ensue. Also, the restraining order makes contact with the Telltale team awkward, to say the least.

Do you have any particular memories in recording for the game?

Oh, you mean what are the memories? Hm… well, as I said, I don’t really remember much about the sessions aside from thinking to myself, “wow… I’m actually getting paid to do this… cool!” Other than that, it’s all a blur. Really.

What’s the best and worst bit about your job?

Best: Losing all contact with reality and becoming immersed in the twisted Telltale universe, where thespian chickens sound like Jean-Luc Picard doing an impression of Mr. Roper from “Three’s Company.” Life-changing stuff.
Worst: Taking off the headphones, grabbing the bathroom key, and regaining contact with reality.

Is there any role you’d love to voice for, either existing or your own creation?

Yes. I’d love to voice for any role, either existing or my own creation.

Do you have an amusingly voiced message on your answer phone?

Yes, I play a very serious man who thinks he sounds extremely credible and helpful, when in actuality, the world laughs at him behind his back. Some find this sort of thing amusing, but it’s quite tragic, really.

Are you hiding a cow?

Thanks for speaking to me, David. Will you be voice acting in the third season?

You’re welcome! No, I will not be returning for Season Three. Damn restraining order.