It’s with great pleasure that I can present to you my interview with Harvey Atkin. For those of you who don’t know, Harvey voiced Sam in the Sam & Max animated series that broadcast oh so long ago!

For my money, Harvey’s portrayal of Sam is one of the greatest and it’s lovely to know how much he enjoyed the role. Please don’t hesitate to leave your feedback in the comments and I’ll be sure to pass it on to Harvey. I’m sure he’d love to hear from you all.

How did you enter the acting industry?

That all started back in high school in a drama club. I started doing commercials and voice overs and, after forty years, I’m a midnight success.

Was it something you always wanted to do?

I had no idea at all. I thought I was going into the construction business with my father, and actually I did do that, then I started getting auditions on the side. It’s a long story. I went to school with my present day agent and he was the one in the drama club, the one who asked me in. We’ve been best friends ever since and he’s been my agent for the past forty years. 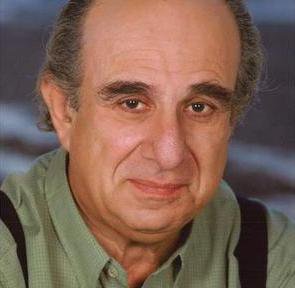 Looking at your previous roles, what have been some of your favourites?

Well, Meatballs was a major success here and I’ve done a lot of smaller parts in movies. The latest movie I did was with Dustin Hoffman and Mini Driver called Barney’s Version. It was done here in Toronto and was based on a novel by Mordecai Richler, who is a famous Canadian author. I’ve done a lot of television series like Law & Order, Cagney & Lacey and Suits. All kinds of things like that.

You’ve done live performance and voice over. What’s the difference between the two and do you have a preference?

I prefer voice overs. I love doing cartoons, you can hide behind the microphone and you don’t have to get dressed up.

When it comes to voice over, is there a different approach you have to take when it’s animation?

When you do an animated cartoon you do a voice before they do anything to animation. A lot of people think it’s the other way round, they draw the pictures and then you put the voice to it, but it’s done the other way.

How do you come up with the voice without the animation?

Well, if you’re talking about Sam & Max, for instance, I saw Sam as this great big-eared sloppy dog who I guess is kind of slow and would talk that way. And then they wanted him to be a little bit smarter than that, so we just speeded up the voice. Kept him down and speeded him up. I don’t think he was the sharpest knife in the drawer, but that’s how you come up with the voice. He wouldn’t have the same type of voice as a little squeaky Chihuahua dog on Walt Disney. That’s my thought process, anyway.

Does a voice come fairly instantly to you when you’re trying to think of it?

Not really. I guess you sort of get an immediate impression and then you have to hone it depending on the other characters in the show. It’s gotta be unique and individual, it can’t be something like somebody else. You’ve got to be able to close your eyes and know who the character is.

How did you get the role of Sam?

I just auditioned for it really. Two or three times, actually. They put out a call and my agent put me down. I auditioned once, I auditioned twice and there I went.

Is it common to have to keep going back for auditions?

No, not really, but they were really keen on doing this properly. The most important thing when you’re doing a cartoon, especially one that’s going to be long lasting, they want to make sure that the actor doing the voice has consistency. So he can come back a month or two later and still sounds the same as he did on the original audition. You can’t be all over the place. That’s the difficulty with children when they do cartoons, they grow up and their voice changes.

Were you aware of the Sam & Max comics or game before you took on the role?

I didn’t really know about it at all. I really didn’t.

Did they show you the comics or game at all?

I think they showed me the comic book once, just to get an idea of what the character would look like so that they didn’t have to go through all the animation. But we didn’t really dwell on that at all.

What did you find most fun about doing the show and voicing Sam?

It was just a fun thing to do. Get up there and play and be stupid. It was well written. I have no idea why it didn’t proceed further. I really don’t know what went on behind the scenes. I just went up there and hit my marks, I said my words, and tried to bring as much life to the character as I could. I was quite disappointed when it didn’t go on again.

I believe it came down to money. Fox Kids wanted to lower the budget, but Nelvana said they couldn’t produce such a quality show for so little. I think Steve Purcell had a lot do with that too because I don’t think he wanted to compromise.

When you’re in the recording booth, are you doing it with the other actors or are you by yourself?

Normally you do it by yourself because they want to keep it clean; they don’t want you stepping on anyone else’s lines. That’s a problem with animation. But in this particular case we recorded together. Rob Tinkler and I were in the studio together because we fed off of each other.

I believe it was one of Rob’s first professional recording gigs.

Yeah, I think he was scared of me.

Did you give him any tips?

Yeah, you always do that. You can always say to somebody, if you’re a performer or professional, you can say to somebody “You know what Rob, why don’t you do this and I’ll come in and do this”. All kinds of stuff.

Does Sam’s voice come back to you fairly naturally?

One of the important things, or the nice things I guess, about doing a cartoon is that when you’ve created a voice it’s yours. Everybody will try and mimic it, but it’s yours and you know exactly where it is. I did a lot of voice work for Super Mario Brothers. I did King Koopa, the big dinosaur, and one of the funniest things about that is that I got the audition one day when I had a really bad voice. I had a cold and a sore throat, so I went in and I did it. And that’s what they wanted, so for the next three years I had to talk that way.

Did you meet any of the crew who worked on Sam & Max?

We met the writer. You don’t meet the animators as such, because there’s probably like thirty of them, but you usually meet the key animator or animation director. They look at you because when you’re doing these things you get into it and you contort your face around with different shapes and sounds. Sometimes they incorporate that in, but not so much.

Was there much room for improvising?

So could you go off script as much as you wanted?

No, not off script as such. It’s very difficult sometimes when animators or writers, and I get this all the time in commercials or voice overs, they write what they hear in their head, which is their speech pattern. Sometimes the person that is actually doing it doesn’t speak that way and finds that words don’t come off the tongue in that particular manner. You adjust it yourself and if it comes out right, fine, or if there are certain words that have to be there for legal purposes or whatever, you keep them in. But they always give you a little bit of free reign.

The dialogue in Sam & Max is quite fast paced and wacky. Did you have any trouble with that?

Na, that’s my kind of thing.

Sam & Max still live on in video games. What do you think makes the characters captivating for different audiences?

They’re so wacko, they’re so far out. They’re funny, it’s well written, and these are two real characters that could really be real.

Looking back on the show, what are your memories of it?

I really enjoyed it. I looked forward to going into the studio. Rob is an off the wall kind of guy and you gotta be on your toes. It was quite demanding, but it was an enjoyable experience. I’ve done a lot of cartoons and this was one of my favourites, frankly.

Why was it one of your favourites?

It was so well done and inventive and imaginative. The characters weren’t namby-pamby, like some of these kids’ shows like The Teletubbies, or something like that. Sam & Max had weird plots and the animation was good, the colourisation was good. It was just a fun show.

You’d happily do more if it came back, then?

Thanks so much for your time, Harvey!