Melissa Hutchison is a hot name in voice acting nowadays. Having won critical and fan acclaim with her role as Clementine in Telltale’s The Walking Dead, us Sam & Max fans were actually won over with her first with her portrayal of Girl Stinky.

It was a delight to be able to talk to Melissa about her work in the series and about voice acting in general. She’s super friendly, amazingly talented and obviously extremely passionate about her work. I hope you enjoy reading the interview.

Hi, Melissa! Please could you introduce yourself and tell us what you do?

Hello Joe, and everyone tuning in! My name is Melissa Hutchison, and I am a voice actress. In a nutshell, I get paid money to bring all of my different personalities to life.

How did you get a job in voice acting? Was it an aspiration of yours or did you fall into it somehow?

Hmmmm, how did it all begin… Well, from my wee humble beginnings, I knew that I wanted to be an actress. I of course grew up watching cartoons, and always thought that would be the most awesome job! To give life to these animated characters! I would practice with my stuffed animals, puppets, hell even my pets all had different voices and personalities (they still do by the way…). When The Simpsons first aired on The Tracey Ullman Show, my sister and I spent like 2 days straight trying to perfect Bart Simpson’s voice.

So, fast forward to my mid twenties, it’s like this light went off in my head! “Hey, maybe I can do this voice over thing!” Fortunately at this time a friend of mine from high school, happened to be a talent agent (and still is) in San Francisco. I called him up told him I was looking to get into the business, and he basically hooked it up! I started going in for auditions, and it has been my career ever since. And for that I am so very grateful.

What have been some of your past roles and which were most enjoyable to perform?

There are sooo many. I really enjoyed playing Trixie Trotter, in Telltale’s Back to the Future game. I found her to be charming, AND she was a nightclub singer, so I got to do some singing! Of course, playing Clementine in Telltale’s The Walking Dead was just about the most amazing experience I have had to date! I truly became so attached to her character. It was a heavy role to play. I really had to transform my mind into that of a little nine year old girl that is in the midst of a zombie apocalypse. It was a very emotional and fulfilling acting experience!

What are the best and worst parts about being a voice actress?

Ya know, I can honestly say that I do not believe there is such a thing as “worst” in the voice over industry. It is highly competitive, and of course there are ups and downs in the amount of work that you book, but all in all I am so grateful for every job that comes my way! Some may be more fun than others that’s for sure. For instance, I would rather be performing as Stinky, than doing corporate narration! I guess they can’t all be fun.

The best part is I have FUN!! I love my job! I can’t imagine doing anything else. The pay is good, the hours are GREAT. When you get to see to the commercial, watch the episode, or play the game you have performed in, it is mind blowing every time. It’s like, is THIS really what I do for a living? Cool. Very cool indeed.

How do you usually prepare for a role?

It’s kind of crazy actually. 93.7% of the time, we don’t even get to see our scripts until we are in the booth recording! It is actually quite rare to get the chance to prepare for a role. With Telltale, and games of an “episodic” nature, you at least get to know your character as time goes by. It’s kind of like when you watch the pilot episode of a new show on TV, quite often the characters seem a bit raw and awkward. But as time goes by they morph, and grow into the character. It’s the same for me. Sometimes I wish I could go back in time and re-record all of the early work, with my later work character.

With all that said, we of course get pretty detailed character descriptions when the auditions are first sent out. Once I read the description, I start conjuring up what the voice and personality would sound like. Unlike all other fields of acting, voice over actors kind of have to be on the spot. We read lines without even knowing the context of the plot sometimes! And unlike stage and television actors we, for the most part, record dialogue without the other actors present. It’s mad I tell ya!

You voiced Stinky in various Telltale episodes of Sam & Max. What did you enjoy about playing this character?

Oh Stinky. What is NOT to enjoy? She is intelligent, sarcastic, funny, bitchy… I loved the Stinky recording sessions! In the game industry, a lot of the “comic relief” characters are mostly written as male parts, so it was quite a treat to dish it out! 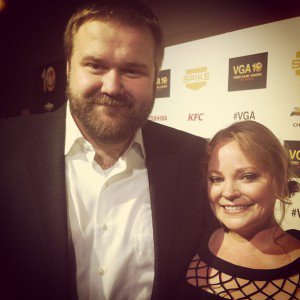 Stinky comes about in the second season of Sam & Max. Were you aware of the franchise beforehand?

Yes, I had heard of Sam & Max, and I believe I had previously auditioned for a role in the game. I knew that there was some pretty stellar voice talent working on this game, so I was very excited to finally make it in!

Do you play the games once they come out or read fan’s reactions online?

You would think that one who performs in the game would actually play it, but alas I do not. I did play The Walking Dead, but for the most part I just watch a lot of gameplay on YouTube, or have my friends play while I sit there sipping wine and barking out commands.

As for the fan reactions, I usually check in when a game first comes out, and then periodically as time goes by. You can’t get too obsessed with what people have to say, or at least you need to learn to take things with a grain of salt. It is truly awesome to put hard work into a character, and then receive compliments on that work. Such a great feeling, and truly appreciated!

Stinky likes to name drop all the famous people she’s met. Who is the most famous person you’ve brushed shoulders with?

Yes. Yes she does! I forgot about that aspect of her. You just reminded me of how damn awesome the writers on this game were. Very clever stuff indeed! Hmmmmm… famous folks eh? Well, my most recent brush with fame has to be meeting Robert Kirkman, creator of The Walking Dead [comic series], at the Spike TV VGA’s. To receive compliments from the creator himself was MIND BLOWING. Plus on top of that I am a huge fan of his work, so that was pretty cool! I also got to meet and work with Gary Whitta, screen writer of the movie The Book of Eli and the new Will Smith movie After Earth. He actually wrote the fourth episode of The Walking Dead game. I tend to geek out on people with talents such as theirs. They have creative, awesome brains.

Weirdly, Grandpa Stinky claims that Stinky is actually called The Cake of the Damned. What’s your favourite type of cake?

So she was Devil’s food cake? I personally am more of a shortcake person. Shortcake with berries and a nice whopping dollop of whipped cream! Although I would LOVE to know what “Cake of the Damned” would taste like!

Do you have any memorable moments from the Sam & Max recording booth?

Every recording session at Studio Jory is memorable! We have too much fun. Lots of crude jokes and laughter. I do believe there should be some pretty good Stinky out-takes floating around in the universe somewhere.

You’ve continued to work with Telltale since Sam & Max, most notably in The Walking Dead as Clementine. What drew you back to Telltale and what is your relationship with them?

Oh man, I am ALWAYS trying to get in on their projects! Telltale’s games are the most dialogue rich games I have done. It is a very dreamy gig for a voice actor. So when I hear they are working on a new project, I get pretty excited! At this point I have grown pretty close to a lot of folks at Telltale. We have been working together for some years now, and with the success of The Walking Dead, we have gone through an awesome, whirl whindy, time together. Being that as it is, I still have to audition for all of the projects! And in fact there were a couple that I wanted in on, but didn’t make the cut! Haha! 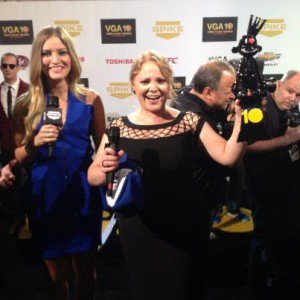 You won a VGA award for your work as Clementine. Congratulations! How did it feel winning and did your life change at all as a result?

Thank you very much! The best word I can use to describe the VGAs and in general all of the other accolades that Clementine and the game has brought in is SURREAL. I still trip out when I look up at my book shelf, and see my funky monkey VGA trophy staring at me! A lot of heart and soul went into voicing Clementine. It was a very intense, emotional experience, so to take home the VGA was such a HUGE honor! And of course when Telltale won the VGA for game of the year, I thought my heart would burst with joy! Ewwww… but you know what I mean. What an amazing night that was!

As for the “life changing” aspect, I would say that I definitely have a pretty big fan base now, or rather Clementine has a pretty big fan base. Getting feedback from people all over the world has been pretty damn cool! Just more recognition within the industry in general is the biggest thing I have noticed. Other than that, I am still just little ol’ me. Oh, and I drive a Ferrari and have a butler named Jeeves. Just kidding. I don’t have those things.

What have you got in the store for the future? A fourth season of Sam & Max, perhaps…?

Fourth season? YES PLEASE! I will tell Telltale to get right on that. HOPEFULLY more Walking Dead will be in my future. They keep things pretty tight lipped, so I have NO idea what is happening with season two. And of course not like I would say, even if I did! So fingers crossed on that one.

Outside of the games, I just wrapped up season one of The Space Racers, which is an animated series that will be airing spring of next year! So keep your eyes peeled for that, but don’t hold your breath, because that is many months away, and it could kill you, or maybe just make you pass out….

Thank you very much for your time, Melissa! Keep up the great work.

The honor is all mine! I had such a blast working on Sam & Max! So THANKS to all of YOU for playing! Cheers, and till we meet again!