When she’s not filling hostel guests with caffeine, Nicki Rapp grabs a microphone and becomes voice actress extraordinaire! Those of you who’ve played through the recent They Stole Max’s Brain! will known her voice for the role of the mighty and great Sammun-Mak. Telltale fans might also recognise her as Morgan le Flay from Tales of Monkey Island.

I was delighted to be able to interview the enthusiastic Nicki Rapp about her involvement in the series and her career in general. Give it a read and feel free to post your feedback for Nicki in the comments.

Hey Nicki! Please could you introduce yourself and tell us what voice work you’ve done in the past?

Hi everyone! I’m Nicki, and I’m a voice actor. That sounded like I should be in some sort of support group. Haha!
I’ve been working for 11 years now, playing lots of kids and furry animals. I’m really proud of the characters I’ve been invited to play: Lili in Psychonauts, all the bratty girl kids in The Sims, the fantastic Morgan LeFlay, and of course, His Radness, Sammun-Mak.

How did you wind up in the voicing industry? Was it an ambition or did it stem from somewhere else?

It’s pretty strange to me that I’ve made this crazy voice of mine work for me. I was teased a lot, and I still have a hard time listening to myself sometimes. I grew up doing a lot of theater, musicals mostly. I thought it was just a hobby, but I felt amazing being a part of it. I wanted to go to film school and write about film – maybe be a critic. Out of nowhere came an audition for drama school that I didn’t think I would make anyway – but why not try! When I was accepted, my parents supported me completely, and I focused on being an actor. The voice acting came along at a suggestion of a teacher at school, and when I moved back from Los Angeles, I found a voice over school in Sausalito, California. I fell in love with it, completely head over heels. I never considered it at all… but now I know it’s what I’m meant to be doing.

Is voice acting your main job?

Alas, it is not. I work for Hostelling International in San Francisco. I’m the girl who will serve you breakfast, get you all caffeinated and help you plan your day. I’ve worked at the hostel for almost 5 years, and I really love it. Well, let me clarify… I don’t love the alarm blaring into my ears at 6 am… but I’ve met so many rad people, it makes it all worthwhile.

Would you like to become a full time voice actress, or do you prefer the balance between jobs?

I am terrible with balance! I dream of the day when I am a full time voice actress… it is all I want to do. Nothing makes me feel so exhilarated and proud, yet totally exhausted. The people I work with – the engineers, writers, directors…. are just so wonderful, and I always feel kinda rad when I leave a session. It’s the best!!

How do you prepare for a role?

Mostly I only get details for a character – descriptions of their personality, maybe a style of speech the casting people are looking for. As with all acting, I think about who I’m talking to, where I am, what happened the moment before. A lot of times this information is not available, but being committed, making strong choices for the character is the most important part. The voice is important, but the acting has to back it up. If I’m really lucky, I’ll see a picture, but surprisingly, this doesn’t happen much. I didn’t even know what Morgan looked like until the game came out; the same with Sammun-Mak. I just have to go from my gut… I definitely adapt as much physicality as I can in the booth, and I really get into it. It’s a wonderful process that evolves line by line, because so much of the time the story is a bit disjointed for recording. It’s always a magnificent surprise to see the finished product, how it all comes together.

What’s the best part about being a voice actress?

I still get so excited every time I have an audition… it doesn’t matter what it is, I just love having the chance to play and see where it takes me. I love to be secret, and to really delve into the imaginary world going on in my head – I get to play it out with all the energy I have. I don’t even think about what I should wear or what I look like or anything like that. The exhilaration of a finished session is so satisfying. I declare that it is the best job in the world!!!

You recently voiced Sammun-Mak in They Stole Max’s Brain!. What did you enjoy about playing this character?

Ohh what a brat! I loved playing Sammun-Mak. I enjoyed the dialogue tremendously and how unabashedly horrible I got to be, but in a totally comical way. I also love what he looks like – totally adorable but what a pain in the butt! It was so much fun to see how it all turned out. 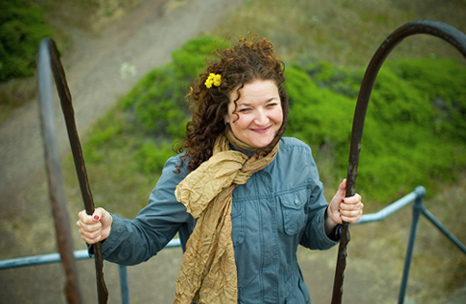 If you could alter reality as he did, what would you change and why?

My heart hurts so much for the oil spill in the Gulf of Mexico. If I had the power of the Almighty Sammun-Mak, this horrible tragedy would not have happened.

How do you differ a young boy’s voice to that of a girl’s?

One of my best friends has an 8 year old son, Kienan – he has the most adorable voice. I mimic him a lot; I mimic cartoons or commercials on TV. I wish I could sound like a real boy, but that’s a bit tricky. Boys have more texture in their voices sometimes, so the sound just comes from the throat more than a airyish girly sound. I know that I also make a really funny face when I do it – I talk out of the side of my mouth. I guess I look kinda smushed up or something. My friends think this is quite comical.

I’ll admit it, it is pretty funny.

You’ve worked with Telltale previously on Tales of Monkey Island. What drew you back to them?

I am so thankful to get another chance to work with such a creative developer. I adore them because they’ve cast me in roles that are so different than I ever got to play before. I was able to stretch and really have a wonderful character arc, especially with Morgan. Working with Telltale has been fantastic; I hope to work with them even more in the future. It has been a really rewarding experience.

How engaged are you with the Sam and Max franchise? Do you play the games and/or browse forums to see the reaction?

Sam and Max didn’t propose to me until recently, and I’ve enjoyed getting to know them more and more. We’re getting pretty serious now. Really great characters, super funny!

I have checked out the forums to read what people think. It’s really nice when the players write comments like they know me because I played Morgan… I feel like they are supporting me and kinda sticking up for me too. It’s such a thriving community, and it’s interesting to see what people have to say. I’m learning a lot.

Elsewhere, you’ve done a lot of work in The Sims franchise. Could you explain to us how a session works for this? I’d imagine there isn’t much of a script.

I’ve been a part of The Sims since 2003, and it is so brilliant! My sessions are 6 hours long, which is super intense, especially when you make up a language on the spot. I go into the booth and watch the monitor – an animation comes up of the child doing something (most likely to annoy others) and I do 10-12 different takes – all the range of emotions. There are so many possibilities that the player could choose, so we have to make sure we really cover our bases. Ohhh man, I tell ya, I am so tired after a session, but it really is fantastic. My brain is usually fried – totally maxed out, but that smile on my face cannot be denied.

Do you find it challenging having to put different emotions and record multiple takes of a made-up language?

People ask me if there is a dictionary of words, but Simlish is a language based on emotion. I must be a little crazy, but I think of new words all the time… I have a notebook by my bed. I think of crazy words in the middle of the night, or if I meet someone at the hostel with a really interesting name, I’ll work it into my Simlish.

When I was recording The Sims 3, I was going through a horrible breakup and it was so incredibly therapeutic to have tantrums and freak out as a 6 year old girl! The tricky part was stopping the tears (haha). It’s a lot of freedom to be so off the cuff, so over the top. I love the variety, the chance to keep trying something new with the language and the timing. It is one of the greatest gifts in my life.

What’s next in the pipeline for you?

I’ve been really blessed to play the characters I have. I still remember the feeling of booking my first job, walking into the session and feeling like all the hard work, patience and perseverance was worth it. The memories of working on Psychonauts, not knowing at the time what a huge deal it was – to the present, working with Telltale – who no doubt will continue to make quality, well told stories, making you laugh and cry. I don’t know what is next for me, but I’ve really been lucky so far! I have a feeling it’s just going to get better and better.

Thanks for your time, Nicki!

Thank you for asking me to do this, Joe. Brilliant questions. Thanks for taking me back and helping me remember how much I truly love what I get to do. I’ve really enjoyed doing this!