You asked, he answered. Steve Purcell, the creator of Sam & Max, kindly gave up some of his time to answer the questions that you, the users, posed to him. Some of you ignored the one question rule, but I’ll left you off – you cheeky scamps!

Read on to see if your question was selected (usernames before the relevant questions). Find out who Steve prefers to voice Sam & Max, the type of music he listens to and what he thinks of the Monkey Island 2: Special Edition front cover — and more!

Detective: What inspired you to become an artist?
I always drew as a kid. I loved cartoons and copied the characters as best I could. I didn’t know if I would ever be able to do it for a living. Over time I just tried to steer more and more of my efforts toward becoming a professional artist and phased out the kind of work that didn’t support that goal. It took a long time to get established but it somehow worked out.

Detective: What are your favourite type of illustrations to do?
I like to paint and I like creating paintings based around characters or some aspect of storytelling.

What is the process for drawing a comic?
The idea comes first of course. If I’m writing a comic story I’ll start by sketching and writing simultaneously. I’ll have a broad idea but I’ll want to conjure up some character moments to help pull the ideas together. Next I will thumbnail the pages, breaking the story down page by page in tiny sketches too small and rough for anyone but me to know what they are. At that point some of the dialog starts getting placed in anticipation of the word balloons. Next is penciling. The full size page, 10 X 15, must be ruled and the thumbnail layout roughed in blue pencil. I’ll tighten the pencil drawings and then write the final dialog. The dialog balloons need to be ‘spotted’ – deciding where to place them. Then, either a letterer creates the dialog in the balloons or it is created with a font on the computer. Last is inking, drawing over the pencil lines with ink. I do a lot of changes to the drawings at that point and add most of the goofy little details. Nowadays a lot of comic creators follow these steps on the computer. So far I still like working on paper.

StewG: What type of music do you listen to?
I drive an hour to the office in the morning. My iPod is on shuffle mode and has a mix of Nick Cave, White Stripes, Aimee Mann, U2, Green Day, soundtracks by Thomas Newman, Carter Burwell, Bernard Herrmann. Stuff I listened to when I was a teenager and oldies like Sarah Vaughn, Ella Fitzgerald and George Gershwin.

The Highway: What sort of TV shows and films do you watch?
On TV my favorites are Madmen, Breaking Bad and Survivor.

The movies I love are 60’s quirky comedies like Harold and Maude, The Loved One and Dr Strangelove. I like Alfred Hitchcock, especially Rear Window, Vertigo and The Birds. Last year I liked Inglourious Basterds; a great, demented adventure/horror/comedy, Fantastic Mr Fox, The Hangover and Up.

Harald B: I notice you often sign your work with ‘SRP’. What does the R stand for?
In high school I told people my middle name was Rasputin and I sometimes signed my work that way. It’s actually Ross. The SRP became a shorthand I started when I was signing tiny little paintings and didn’t want to clutter it up with a full signature. 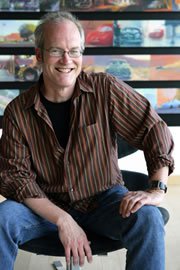 Is there any jealousy from your brother Dave over Sam & Max’s popularity?
He hasn’t shown any. I think the fact that what I did with Sam & Max was so different from how they started he doesn’t think of it as a rip-off.

What’s your favourite Sam & Max story?
I guess Sam & Max On the Road is the most personal because it established the Road trip aspect of Sam & Max which is based on travels with my family when I was a kid. Some of the inspiration also came from a hilarious travel book called Roadside America about bizarre tourist traps scattered across the USA. Check out their website!

Tjibbbe and Icedhope: Will there be any new Sam & Max content besides the Telltale games? Perhaps new comics, another TV show or a film?
I can’t make any guarantees except no one’s clamoring to do the feature film at the moment. I’d love to do something new and now is the time but I can’t promise anything at the moment.

Tredlow: Which character, aside from Sam & Max, is your favourite from the franchise?
I’m fond of the Rubber Pants Commandos. Two diaper babies with rifles led by an irritable chimp. They coo and giggle and fire shotguns willy nilly.

Who is your favourite voice actor for Sam and Max and why?
I think of Sam & Max like any pair of characters that are interpreted multiple times. Many actors have played Sherlock Holmes or Batman or James Bond. Bill Farmer was the first Sam so I’m fond of his version but there are aspects of all of them that I like. The animated series Sam was Harvey Atkin and he was high energy compared to the more mellow Bill Farmer. Robert Tinkler, the TV Max had a fun range to his voice and added the aspect of Max where he’d riff on something in a specific type of voice. When he was between takes Robert would relax by doing a perfect impression of Chewbacca. The newest guys David Nowlin and William Kasten have settled into their parts nicely as well.

Rentless Monkey: If you had to add a third character to join Sam and Max, what would he/she be like and why? There was The Geek in the animated series – ­ do you think she worked well?
The Geek was the answer to the TV Network wanting a female character on the animated show. I don’t mind her as a character but I tried to keep her in the background as much as possible. I actually think it’s unwise to add a character to an established duo. There’s a rhythm to the two that you don’t want to have to interrupt.

DrRocketGenius: Are there any plans for new shirts or other merchandise? Is there something that you’d like to see made?
I did a new shirt for the Telltale Store and I’m working on designs for a couple more. There’s also a flaming Max head shot glass on its way. I’ve always wanted to do little vinyl figures and a plush Max. Those are more complicated so they’ll stay on the wish list until I can make them happen.

How concerned are you by the ‘canon’ of Sam & Max? ILDC wants to know where in New York Sam & Max’s office is and Snapshot asks how old the pair are meant to be. Do you know this, or does it not bother you?
I think ‘canon’ can get in the way if you worry about it too much. A lot of people like to organize every detail in character series. For the Telltale series it’s more important to maintain a continuity from season to season. In the comics I was never concerned about it at all. 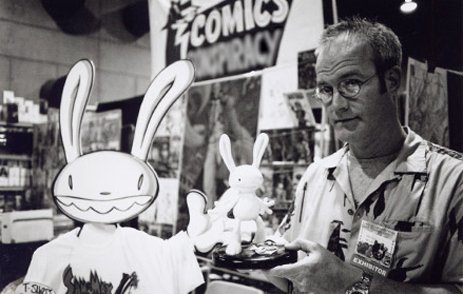 You did some small voice acting in an Up short for Pixar. How did you find this experience? The Highway asks if you’d ever consider voicing a character in the Sam & Max universe?

I’ve done a few other minor characters for Pixar as well and I enjoy it a lot. It has a totally different discipline from the other kinds of work I do. I have my own versions of some of the Sam & Max character voices and if I ever did another flash short I’d probably do most of the voices myself.

Would you ever consider creating a brand new comic series besides Sam & Max and Toybox?
I’ve got a bunch of other characters but not as much time as I wish I had to use them all. I definitely would need to find timesaving techniques if I did another comic.

Tjibbbe: What is your role within Pixar?
Right now I describe it as Story Development. There will be more specific information about my Pixar work to talk about next year.

What do you like about working at Pixar?
It’s overflowing with creative energy. People work long hours but still go home and publish comics and direct short films and paint landscapes. They are inspired by their day job rather than burned out from it.

What do you think of the cover for the Monkey Island 2 special edition?
It’s a curious thing to see your painted remade in a new style. I guess I should be flattered that they used my cover as the jumping off point for the new one and feel lucky that someone is still referencing my artwork 20 years after it was done.

Thanks for the interview, Steve!