Vegas Trip (still his real name), voice of Chuckles and fan favourite Sal in Telltale’s episodic series, kindly agreed to be subject to an interview — a prospect which isn’t as scary as it sounds!

Some of these questions were posed by you, the faithful readers, so be sure to read on to hear what this multi-talented – theatre, voice over and comics are all in a days work – man has to say.

Hi Vegas! Please could you tell us a little bit about yourself?

Carbon-based bi-ped with a penchant for buffoonery. Playing music before I could really stand. Doing theater, comedy and art since I was forced to school with a bowl haircut and glasses. When the musical instruments weren’t around I went to my voice. Been there ever since.

What did you want to be when you were growing up?

A combination of: David Lee Roth, Fred Astaire and Dean Martin… add in some Bruce Lee for spice.

OriginalGagBonkerss and Leplaya: How did you enter the voice acting profession and, more specifically, become involved with Telltale Games?

I got into VO through a good friend of mine. She knew all the impersonations I could do and wanted me to audition for an animation company that was part of Warner Bros. I came in to their office and did seven voices in under a minute. They loved it and then put me on several of the shows and BOOM! It begins. With Telltale it was basically an audition thing. I read for several parts and they liked my character. Plus, they had heard of me from Mondo Mini Shows.

ShadowGirl7: What voice acting have you done apart from your work with Telltale?

I’ve done so much VO now in the past 10 years that it’s hard to recall most. But, the best are still: the voice for Universal Studios for several years, PowerRangers video game, voice for Cazadores for a while and I have a toy out called ‘SBD3000′ – it’s an awesome dancing, talking, farting (YES, farting!) robot that is impossible to find now (cheaply). Plus, I’m the voice for ‘Mr. Pencil’ on several platforms at Leap Frog toys. I also did an unreleased series with Roger Jackson (for Cisco systems), which is sad it never saw the world. I was Jerry Lewis and he was Phil Silvers.

Queen of the lobsters: What kind of voice acting do you like to do the most? Are there certain types of characters that are your favourite?

Collaborative is the best. With a room of other (funny) actors all feeding off each other. It really brings out the humor and timing. As for fave characters? Ooo, that gotta be Shatner and Connery and Pat Stewart and Charlton Heston.

Is it difficult to emit the required emotions in your performance when you aren’t playing off another actor in the booth?

Yeah, sometimes it is a bit tricky. If you don’t know what the client wants and they give you bad direction it can get a bit frustrating. Feeding off others rules. But if they’re not there ya gotta get weird and bring out your imaginary pals. 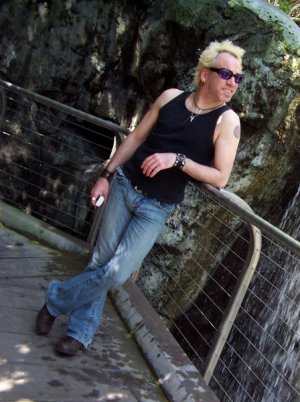 What are the best and worst parts about voice acting?

Best and worst… hmm… well, the best is obvious. I have always done voices and mimicked everything, so to do that and get paid for being an idiot is all I could hope for. I love being in the studio and watching the client or crew laughing and really digging whats working. The down side is that clients usually have nooo idea how to handle the talent. Or even how to direct them or convey what they want. They can be redundant as hell about what they’re looking for and come right back to the first thing you did after they said they didn’t want that. They think they have an idea of something, but have no way to explain it. And it you don’t get that ‘vague’ notion in their head then you probably won’t get the gig. Or make them happy. Ugh.

Is voice acting the day job for you, or is it just something on the side?

It is actually my main career. I work part time as a bartender and most of the time as a stand-up comic. I just quit my band of 10 years (sad) too. I’m also writing a comic for Dark Horse.

What can you tell us about said comic?

I can’t really go into details on that. No artist yet. But It’s based on me ex-band, ‘Gooferman’. Very ‘Monkeys’ meets ‘Clockwork Orange’. The Dark Horse staff saw us play several years ago, along with Eric Powell (The Goon), and they loved us. So we started talking and next thing ya know I’ve got an idea for a book and they wanna put it out. But then they had to drop it cause of the recession and not taking on anything new for a while; now its come back as they are stronger in sales again. But I’m definitely looking for an artist… shit, I just gave you all the detail. Hah!

Teeth and Jon NA: Was Sal’s voice influenced by anyone in particular? Fans have noticed a lot of similarities to Patrick Warburton – was this a conscious decision?

Pat Warburton, for SURE! I love that guy. His voice and demeanor are hilarious. I saw the character and knew that was the way to go. Check out his movie ‘The Woman Chaser‘… brilliant!

JedExodus: Do you think the death of your character, Sal, was a waste considering his charisma and popularity? His death is pretty senseless if you think about it!

Yeah, that sucks. But they said anything is possible. I mean, he is a big cockroach, right? They never die. Just run under things and mutate. Maybe fans should threaten and lash out to bring him back? I will.

Do you play through the games once they are out or check out any fan feedback?

I’ve only played the game once, or at least one episode. They gave me a copy of the second season? I was the ‘men in black’ baddie with the shades [the character Chuckles]. But I’ve never seen any feedback or heard any thing until now, which is very cool. I had no idea.

Supmandude85: If a genie granted you three wishes then what would they be?

Thanks for your time, Vegas. What have you got planned for the future?

Well, I’m focusing on the stand-up comedy at the moment. Gonna take a break from rock ‘n’ roll for a short while. I can never leave it. Plus, I’ve got a few gigs comin up that must be done. I’m still a clown, just not as much. I want my comic to be out by next year’s San Diego Comic-Con. That would be so coool!